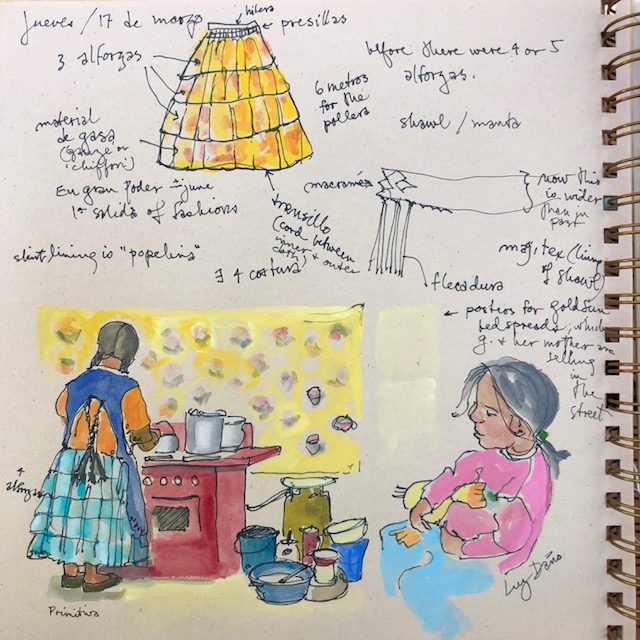 We had been invited to lunch in El Alto, Bolivia. My student, whose friends we were visiting, was helping prepare potatoes as we sat in this small, well-organized kitchen. Delicious smells filled the air. The grandmother was at the stove with her granddaughter nearby, the intense colors of their clothing complementing the reds and yellows of the stove and walls. What a sensory feast! My student and I were in Bolivia exploring sensual and non-discursive methods of documenting field work. So, in the spirit of our collaborative endeavor, I took out my notebook and began to draw.

Ethnographic fieldwork is a multi-sensory experience that enables us to learn about the world by means of sight, hearing, taste, touch, balance, smell, and more. Given this richness, why do social scientists so often—and very quickly—reduce observations and experiences to words in notebooks or computer files? How can we challenge this tendency and work to learn about the world in new, multi-modal ways? In this paper I ask «Why draw?» and argue for the theoretical and methodological value of keeping visual fieldnotes in the context of field research.[1]

Slow down and draw

Drawing takes time and can force us to slow down and observe what we might otherwise miss or ignore. The act of looking out into the world, drawing on a page, then repeating this rhythmic exchange of looking-drawing-looking-drawing also provides time to think and connect the visual to a bit of conversation, a smell, a memory, or a theoretical insight.

Drawing can also be done almost anywhere: sitting in a park or cafe, waiting for a friend, riding a bus, or attending an event. I sketch when I fly and sit in a window seat with a good view to the ground. Weather and light conditions permitting, I look out and draw to gain a sense of geographic formations and large-scale human endeavors that appear as patterns down below. All of this helps me focus on my upcoming work, reminding me of the history of a place, imagining myself on the ground in a social context, and prompting me to think in a manner that is open-ended but engaged. While the airplane is transporting me from point A to B, the route my eyes, my drawing hand, and my sketches take are more accurately described as wayfaring. Tim Ingold (2007:75-6) contrasts these two modes of travel—transport and wayfaring—the former concerned with goals and destinations and the latter with what happens along the way. Given the improvisational nature of my drawing, my sketches at this point are more like reminders of an experience and seeds for future thoughts rather than any sort of answer or «fact.» [2]

Representing the world “out there”

The drawings most likely to appear in social scientific works—and the sort that people might expect when you say you’re drawing as part of fieldwork—are ones that can be considered “representational” (images of a world “out there”) or “iconic,” in the sense used by Charles Sanders Peirce. They often depict people and material objects—“things,” broadly put—and the physical contexts in which these appear. Thinking of this, people will say, «But I can’t draw.» While classes can help someone obtain a level of proficiency in, for example, scientific illustration, there is not just one way to draw. Think instead of the range of mark-making possibilities—a color, texture, or line, for example—and how these relate to the world and can function as a visual note. 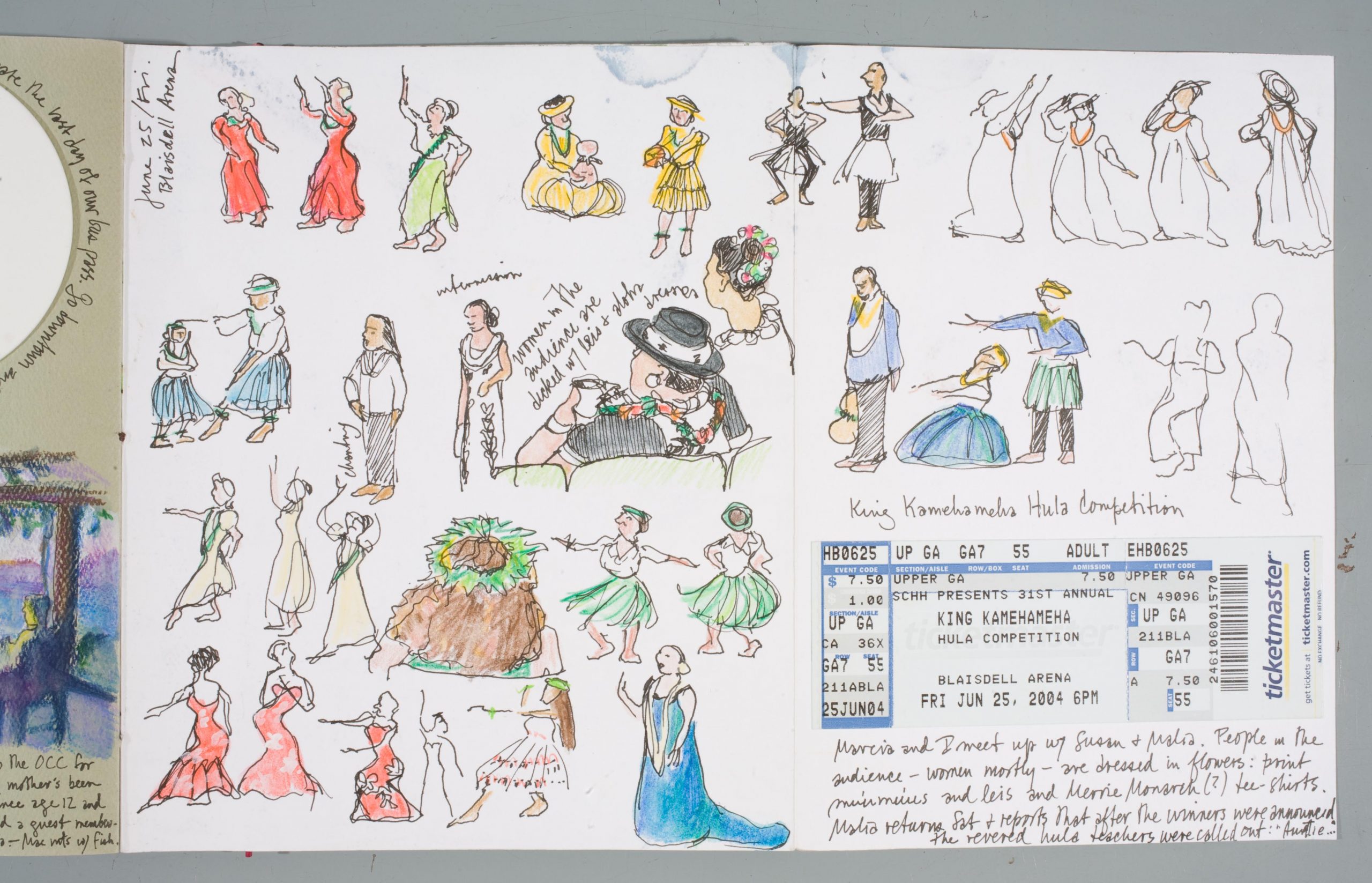 In my own case, I like the challenge of drawing people and try to give a sense of their movement and body postures. At a hula competition in Hawai’i the dancers were moving extremely fast and I could only capture the basics of posture, weight, and balance that characterized each dance. Still, these helped solidify my memories in ways not possible with words. And while I have had a fair amount of training in drawing the human figure, that doesn’t have to be the case for those who want to draw people. Stick figures are good for showing motion (and emotion) and simple lines can suggest a hand gesture, the curved back of an old man, or the space between two people conversing.

Other approaches to representing the world include:

• Making marks with different materials that relate to a particular place (e.g., ink, or colored pencils, but also the local dirt or a piece of burnt wood from a fire).

• How about color? What color is that stucco wall or the fruit you just ate? How to note the colors of objects that photographs do not capture well?

• What marks (lines that are thick or thin, wavy or jagged, say) remind you of the taste of a particular food, the sound of a marimba or firecrackers, or smells in a market?

Contexts of creation: indexes of being there

There are situations where the context in which you’re drawing has a direct impact on the marks made on a page. In Peircean terms, these marks are indexes because they signal an actual relation or co-presence between the world and what is in your notebook.[3] For example, if you draw while on a bus, the uneven surface of the road is directly reflected in the bumpy lines made by your pen. Drawing while sitting in a dance club and moving your hand/pen rhythmically to the music creates an index of your movement. And how about drawing or writing while eating? A food stain in your notebook can be an index of a meal you ate or a cup of locally-grown coffee that spilled. The same may be true of the marks left by blood, sweat, and tears: reminders of an accident, heat, or an emotional event. Sometimes I use local materials to represent the very scene I’m drawing. Here I used mud to draw the earth and a burnt twig to draw trees charred by a forest fire. 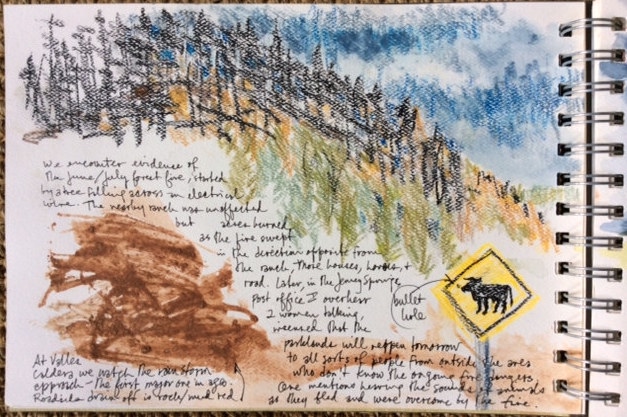 Drawing as a social act

Many times, drawing in the field is a social act, done in public spaces, surrounded by people. Writing in a notebook can be very private and the contents of the pages unintelligible (especially if the language is foreign to those looking on); however, the act of sketching can be an invitation for people to watch and comment. That happened to me while visiting Chichén Itzá. While I was drawing tourists in the context of temples sites—colorfully dressed visitors amidst bright white buildings—people would stop to look at my work and occasionally chat. On other occasions notebooks are good places to invite people to draw a map or a weaving design. And some children will eagerly accept an invitation to draw. 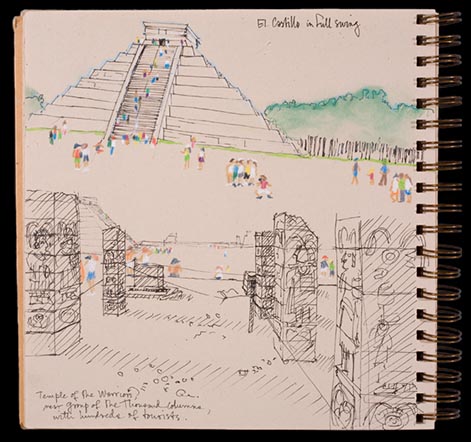 How a person draws an object, scene, experience, or memory—or creates a non-representational image—on a 2-dimensional page or a 3-dimensional book form is influenced by cultural and historical conventions. What are the local conventions of representation in a particular fieldsite? How do they inform the way a person represents the world in visual terms? And how might anthropologists learn these in order to see the world and draw in different ways as part of research? Rudi Colloredo-Mansfeld (2011) worked with a Tiguan artist in Ecuador to learn local conventions of spatial representation. This connection led Colloredo-Mansfeld to conversations about the creation of paintings, judgments of his own drawing efforts, and insights on key values in Tiguan life.

In another case, this one from my notebooks, I used an early 20th century photograph of Bronislaw Malinowski working in his tent in the Trobriand Islands as inspiration to draw myself drawing in my tent during a field trip with students to the Yucatan. This was the first time I had ever done research based in a tent and the parallels to Malinowski echoed in my mind. While the Malinowski image that I knew was taken by an unseen photographer, I drew myself as if the viewer of my notebook were looking at the scene through my eyes, a perspective that I feel echoes the more reflexive work of current anthropology compared to that of the unstated outsider perspective of one hundred years ago.[4]

There are many more possibilities for gaining methodological, theoretical, and ethnographic insights via drawing. Additional questions can motivate how you make marks on notebook pages: How to portray action or emotion? How to think about the body, gender, or aging in line or color? How to record absences? Also, a topic I haven’t covered but that is important for multi-modal presentations of findings: How to combine words and images so as to challenge readers to think differently? Ethnographic fieldwork is a multi-sensory experience. How can drawing help us and our readers to see—perceive and understand—in new ways?